The Manilla Weir is located on Halls Creek Rd on the way to the Golf Club. The Rivergums Caravan Park is located on land just above the Namoi River. Close walking distance from the river and both lower and main weir.

In the 1950's-60's the weir area was visited by many families. With water flow more consistent than today it was the popular area for families and the younger generation. Walking across the wall to the other side was where the swimming and diving took place in the deeper area. Water activities were enjoyed from the bank area on the southern side. Sitting in blown up tractor tubes on a relaxing day were always enjoyable.

Being a monkey for a day and attaching a rope to a tree branch was a formidable task that resulted in much fun in the Namoi River.

Further down the river, near the lower weir, school swimming sports were held. This area provided an open area for swimming competitive sports like striving for the Bronze Medallion. This area had a softer touch than the main weir, with its grassed area banks and calm waters.
Fishing was always popular just below the lower weir. The gentle rapids settled in a deeper area for the fish to roam for food. I especially remember fishing at night time. Lines were used and attached to a small flexible willow twig secured in the ground with a bell attached. When the fish took the bait the bell would ring and hopefully you were successful in pulling in your catfish.
We lived in a good secure, safe and carefree  time in the 1950s-60s. There was lush Kikuyu grass at home, with sprinklers watering to keep the grass healthy and full. Houses were affordable, with full time employment. It was a free country life and a time where people prospered.
Manilla Main Page: https://manillanswaustralia.blogspot.com/

These two pictures show the view from the River Gums Caravan Park area down towards the river. The road near the river moves from the lower weir to the main weir wall. 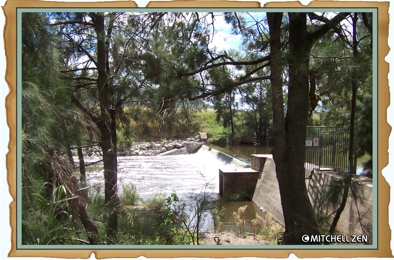 March 2013 - Showing the weir with quite a bit of water going over it on this day.  Note the barrier stopping people from entering the wall area today. There are now rocks in the slip stream on the other side. This was open in the early days. With a smaller flow of water it was easier to swim back after diving or jumping off on the north side, to then sit on the ledge just under water before getting back up the wall in the slip stream area. This area got very crowded at times in the 1950s/1960s.

You can drive from the small weir to the main weir wall. The road meanders beside the river. Or walk - my preference.

Along the way there are tables and seats (2013). However, gum trees tend to drop branches without warning. This area is quiet and relaxing. At the main weir wall the sound of water flowing adds to this ambiance.

At the entrance, just off Halls Creek Road, is the Manilla Second World War Commemorative Archway. This memorial consists of two stone pillars, supporting a metal arch. The arch spans a driveway leading to Chaffey Park. There are several plaques attached to the pillars, as well as to several bushrocks nearby. A remembrance to our armed forces that served in different areas of the world. 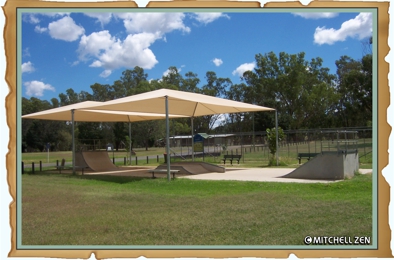 A skate board ramp is also located in this area.

In 2016 the Manilla Community Road Safety Park was completed.

The drought was affecting farmers and with so little rain the weir had no water flowing over it.

Left: Dredging was performed while the river was low and the gravel shown in this picture was obtained from the upper side of the wall. Right: April 2016 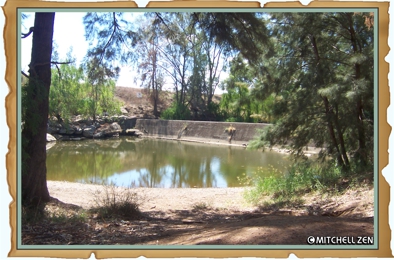 It was not a pleasant sight in 2019. No water flowing. Yet just 2 years previous the Namoi River is documented below as happily flowing again. These changes are a fact of life for the Weir.

The flow of water arrived and everyone was happy. The Lower Weir provided an opportunity to develop a sense of exploration within the nature of water life. In the 1950s/1960s it was also an area where you could just be at peace with the bush nature, the grassed area bank, and on the calm water above the wall, enjoy your toy plastic boats, or make your own out of metal and try out your initiative in life.

Just to the left of this picture, fishing was popular as the rapids flowed into a calm and deeper area of water. Catching catfish was always enjoyable! And enjoying the cooked taste for dinner at home later - especially with lemon.

Left - Walking track down to the weir. Right - Opens up to a gravel bank and fishing spots. Photo was taken during March 2014 when there was little water flow due to a drought. Normally this area has a larger expanse of water. 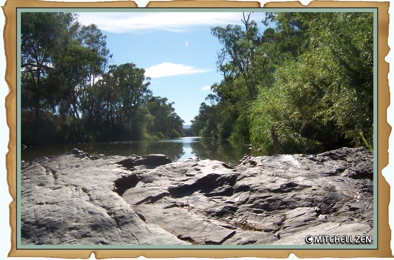 Looking back up stream to the main weir wall.

When the water flows, life opens up and we all connect with Nature.

The Namoi River has many areas to enjoy the ambiance of nature.

To sit and contemplate about this peaceful life.

The simple things of hand line fishing at Higgins Bridge.
Read the Ken and Win Rogerson story about Manilla
https://kenrogerson.blogspot.com/ 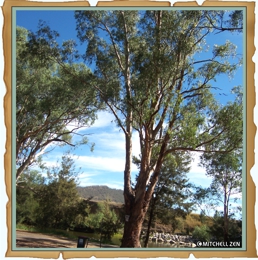 When we are receptive of Life's formations in the context of The Manilla Weirs and the Namoi River we can gain an appreciation of how these areas play a part in the formation of one's psyche. This can be entered by also laying down on the upper bank adjacent to the Main Weir and look up through the trees to the sky. Where we all play a part in this Life.
In Zen words "We set ourselves free from the misconception of Self influenced by societal expectations, and enter our original Self to transform Ones-Self towards the Enlightenment of the Nature of Our-Selves."
Link to River Gums Caravan Park
https://www.caravanparkphotos.com.au/manilla_rivergums/
Located adjacent to the Weir
(C) Mitchell Zen
* Please turn on Sound * 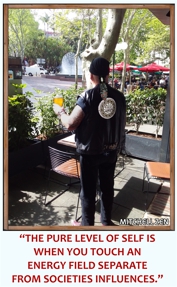